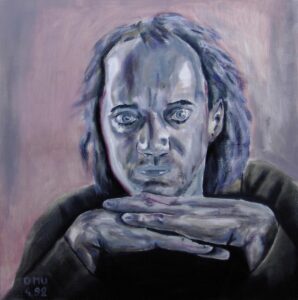 “…… The subjects he deals with are often very personal, such as his wife and child or a self-portrait, but sometimes they are also images (photos, film or advertising images) that have deeply affected him, such as the series of lithographs Schmück Mädchen or the Auschwitz-Sarajevo oil canvas or images that want to evoke strong feelings such as the lithograph “The kiss” from 1997 or simply the sometimes provocative, sometimes tender, sometimes unapproachable poses of the models he portrays. Dirk Mutsaerts paints and draws many bodies, mostly female bodies.In doing so, he avoids not only any form of objectification or psychologization, but usually also any form of spatial depth. It is as if he always wants to place the body at a tangible distance in front of the viewer, or at least the distance from this scans bodies, which at times leads to highly remarkable perspectives such as in the two paintings of his Chinese or Japanese girls. For that matter, Dirk does not often start from an objective reality in order to grasp or penetrate that aesthetic, but above all he wants to confront us with his subjective experiences. His art is an effect of subjective feelings, sometimes restless, very often indefinable and unstable. One can easily imagine Dirk as someone who becomes entranced, but precisely because of that does not necessarily want to finish or perfect something. He seems to me to be someone who wants to ‘recreate’ his own restlessness in images….”